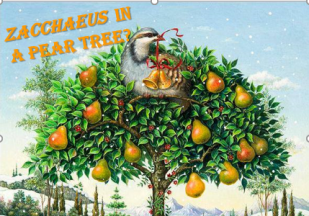 We’ve all had the song stuck in our heads at some point. I imagine you internally hear hear the tune as you read this post. The twelve days of Christmas begins on Christmas Day. It then culminates with Epiphany on January 6, the traditional day that the magi brought gifts to Jesus. Today, many end their Christmas celebrations on December 25, but maybe this year can be different for your family.

We celebrate the birth of Jesus on December 25 (Christmas Day), and his birth is celebrated through Epiphany. So, let’s be deliberate about celebrating him in a unique way this Christmas season. Let’s learn about twelve of his lessons, that align with The 12 Days of Christmas song.

Before we dive in, let’s look at the twelve gifts mentioned.

For each day, I will post a lesson from Jesus. I’ve chosen to align Jesus’s parables with the twelve gifts mentioned (as much as possible), in hopes that it will be easier to recount these stories. On each day, read the parable with your child and discuss its implications. Then (like the song does) review parables from previous days. Use the gifts listed in the song to help you remember the parables from previous days.

On Day 1, the song mentions a partridge in a pear tree, so naturally, I chose a parable that involved someone in a tree. Cue the Zacchaeus song.

Luke 19:1-10 tells the story of someone who did not have a good reputation among his people. He was the chief tax collector, which meant that he was the boss of the other tax collectors. (Can you hear the people booing?) He had a lot of money. He received a portion of what the tax collectors collected through tolls, taxes, and customs. He may have even pocketed more than the law required people to pay. In addition, he worked for the Roman government, so the people of his region likely saw him as a sell-out.

When Jesus entered the town of Jericho, vertically challenged Zacchaeus couldn’t see. I imagine him like a child in a crowd who can’t see a parade. Unfortunately, no parent offered to place him on his/her shoulders. Zacchaeus was evidently a problem-solver since he found a sycamore tree to climb, which gave him a better view to see Jesus passing by.

When Jesus passed by, he looked at the climber and asked him to come down, saying that he was going to stay at Zacchaeus’s home. Zacchaeus came down from his perch and was happy, but the crowd was not. Why had Jesus chosen to visit Zacchaeus, a sinner?

Right away, Zacchaeus told Jesus that he would give half of his belongings to the poor and that he would repay (times four!) anyone that he had cheated.

Jesus said,  Today salvation has come to this house, since he also is a son of Abraham. For the Son of Man came to seek and to save the lost. (Luke 19:9, ESV).

What can we learn from this story?